Perched on the edge of Lake Wakatipu in New Zealand’s South Island and surrounded by miles and miles of mountains, Queenstown has an enviable reputation as ‘the Southern Hemisphere’s premier four season lake and alpine resort’, a role which boosts its year-round population of 19.000 with an average 1.9 million visitors a year. The centre of Queenstown is on the north side of the lake, but much development now takes place on the sunnier north-facing side of the lake, where on a peninsula that juts out into Lake Wakatipu, known as Kelvin Heights, houses can enjoy views of lake and mountains to both north and south. It was on just such a site that New Zealander Anne and Australian Bryan Oliver purchased a plot occupied by a modest ‘bach’ or ‘crib’, to build a holiday-house for themselves, their family and friends – their permanent home being some 4000 miles away in Perth, Western Australia. 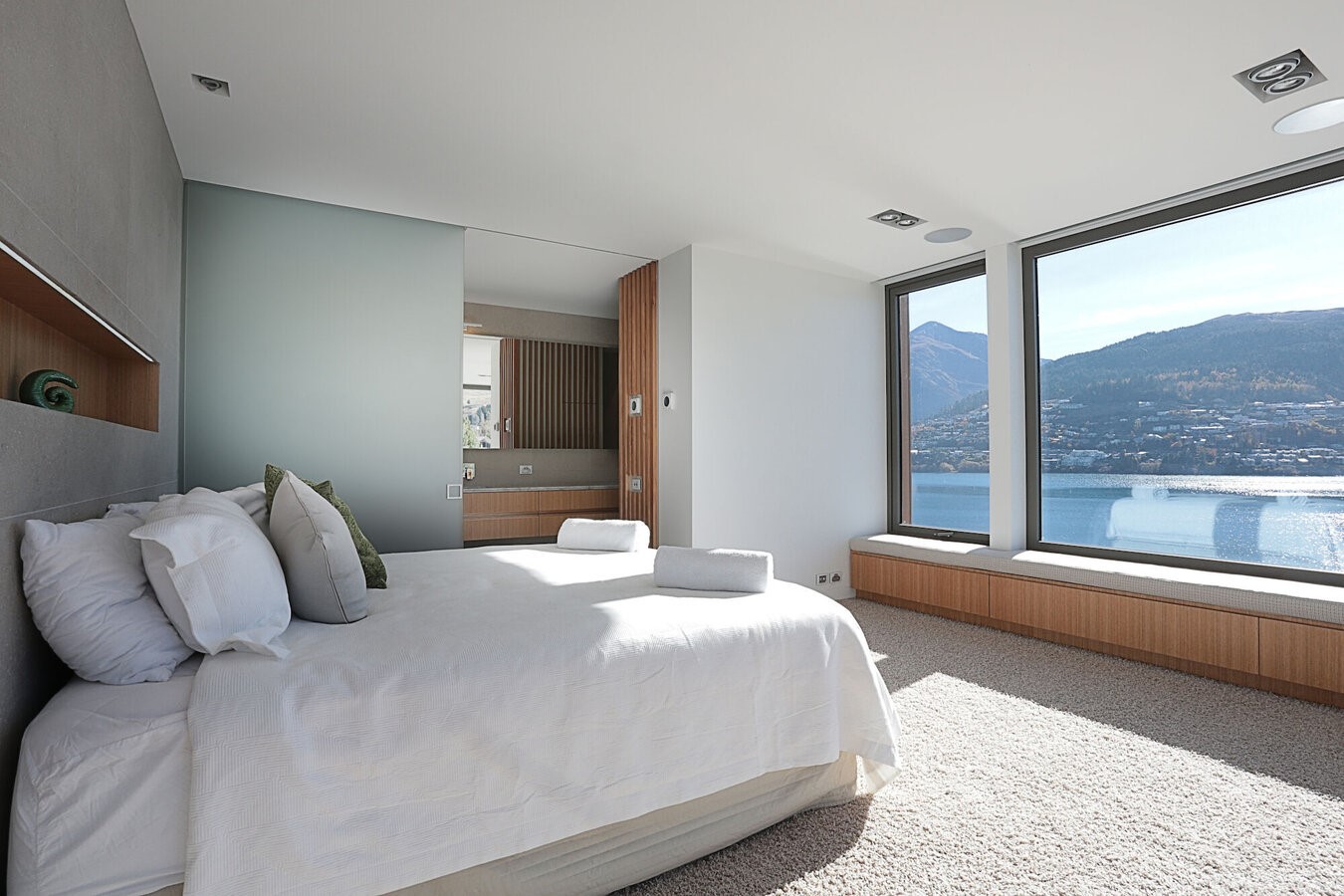 Designed by Queenstown and Aucklandbased Koia Architects, four simple box-like units clad in cedar and local schist stone step down the steeply sloping site between Peninsula Road and the lake. Thanks largely to a variety of Reynaers window and door systems, the house makes the most of its location in terms of views and light, and achieves the architect’s aim of a house where the boundary between inside and outside is blurred; this effect is reinforced by the use of the schist stone inside and outside and with grey Kerlite tiles being used for both internal and external floors. The architect wanted to create a building that responded to rather than competed with its location, while the clients wanted a house where they could spend as much time outside as inside – as Kiwis do. 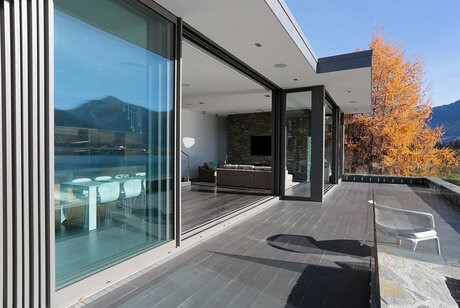 Entering the house from the south, your eye is immediately drawn through to the lake and mountains beyond as the main living area is set six steps down in front of you. To the left the entrance hall leads to the staircase up to the master bedroom and guest bedroom or sitting-room. Set at the highest level of the house, Reynaers CS 77 windows placed in north, east and south walls provide these rooms with magnificent views to lake and mountains on both sides of the peninsula. The staircase that leads up to this floor is the first of several in the house lined with fins of rimu, a native New Zealand timber reclaimed from the ‘bach’ previously on the site and from other demolished properties. The rimu provides a warm thread connecting the different parts of the house, but also connects the house to its location and its past

The main living room spans the entire width of the house, combining together fire, sitting, dining and kitchen areas. Using a combination of Reynaers CP 155 large sliding doors and Reynaers CS 77 fixed windows, Koia were able to provide an entire thermally insulated and condensation-free translucent north wall, with the CP 155 windows able to be slid back to incorporate the spacious balcony as part of the living area. A deep overhang on the living room roof reduces the potential solar gain in this area from the summer sun.

A stair behind the stone wall at the west end, lit by Reynaers CS 77 windows, leads down to two further bedrooms, a bathroom and a laundry. Reynaers CP 96 sliding doors provide the two north-facing bedrooms with magnificent views as well as excellent thermal insulation. The next stair, again clad with rimu fins, leads down to the lowest level of the house. The architects have combined local materials and the latest Reynaers glazing and aluminium technology to make a stunning house that will be a pleasure to inhabit in an of Queenstown’s four diverse seasons.

Shopping is no longer about providing basic supplies. It’s a leisure activity.